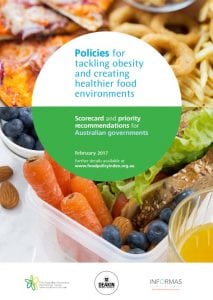 A landmark Prevention Centre study involving more than 100 nutrition and policy experts from 53 organisations across the country has identified critical action areas for Australian governments to tackle the rise of obesity through unhealthy diets – now one of the leading causes of preventable death and disability in Australia.

While Australia is leading the world in some policies to improve population nutrition, such as key aspects of food labelling and keeping nutritious food GST-free, we are falling behind international best practice in others, according to a large national project conducted by Dr Gary Sacks of Deakin University.

“We know action is needed on obesity but this report does more than just state the problem. It maps out where Federal, State and Territory governments can each play a part – it’s a constructive way forward that quantifies how we might address this big-picture challenge,” Dr Sacks said.

“It has drawn on expertise from more than 100 nutritionists, health organisations, academics and community groups and builds a comprehensive picture on where we can act to make the most difference. This collaborative effort makes it all the more powerful.“

The study found that huge variation in the implementation of nutrition policies across federal and state governments is diminishing Australia’s efforts to address obesity. Download the full reports here.

It recommends the development of an overall national strategy and implementation plan for improving population nutrition, the imposition of taxes to increase the price of unhealthy foods (especially sugary drinks), and regulations to reduce exposure of children to marketing of unhealthy food.

“Often good policies exist, but they are not being implemented in a coordinated way,” said Dr Sacks, the leader of the study and a Senior Research Fellow at the Global Obesity Centre in the School of Health and Social Development at Deakin University.

“It’s a good start to have policies for restricting junk foods in school canteens, but if kids are then inundated with unhealthy foods at sports venues, and they see relentless junk food ads on prime-time TV, it doesn’t make it easy for them to eat well.

“There is no silver bullet to helping people eat more healthily – we know from international evidence that we need coordination across federal, state and local government to implement a whole suite of different policies to tackle the problem.”

Unhealthy diets are now one of the leading causes of poor health in Australia. Almost two out of three (63%) Australian adults and one in four (25%) Australian children are overweight or obese. The direct and indirect costs associated with overweight and obesity have been estimated at over $56 billion each year.

The study identifies policy recommendations for each jurisdiction, prioritising them based on their perceived importance and achievability.

Key findings of the research included:

Jane Martin, Executive Manager of the Obesity Policy Coalition and a partner in the research, said a piecemeal approach would not work to turn the tide of obesity in Australia.

“When nearly two-thirds of Australians are overweight or obese, we know that it’s not just about individuals choosing too many of the wrong foods, there are strong environmental factors at play – such as the all pervasive marketing of junk food particularly to children,” she said.

“The study is a valuable roadmap for governments, who have a real ability to influence some of these key drivers of unhealthy diets and obesity.  Australians suffering and dying younger and younger from weight-related illness does not have to be a foregone conclusion.”