Report card on the liveability of our cities

Findings of the Prevention Centre’s National Liveability Study feature in a new report that details the first baseline measure of liveability in Australia’s state and territory capitals. 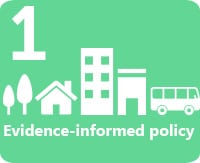 The report represents the culmination of five years of research supported by three programs.

By mapping policy standards designed to create liveable cities, the researchers found that no Australian capital city performs well across all the liveability indicators, with many also failing to meet policy targets aimed at ensuring liveability.

They noted widespread evidence of geographical inequities in the delivery of liveability policies within and between cities, with outer suburban areas less well served than inner-city suburbs.

The researchers discovered measureable policies and targets to deliver liveable, walkable communities are often not in place, and often those in place are not strong enough. They concluded that policies aren’t making best use of the available evidence.

Chief investigator RMIT’s Distinguished Professor Billie Giles-Corti said the first-of-its-kind report shows that better comprehensive and consistent policies were urgently needed across all our capital cities to maintain and enhance liveability and ensure the wellbeing of residents – particularly as Australia faces the prospect of a doubled population by 2050.

“This report is a diagnostic tool to understand the current state of liveability in Australian cities that could and should be repeated regularly,” Professor Giles-Corti said.

“What’s even more important is what governments do about it.  We’ve made seven recommendations in the report which we’ll be pushing to see adopted at local, state and federal level.”

The research team received funding from the Prevention Centre, the Clean Air and Urban Landscapes Hub of the Australian Government’s National Environmental Science Program, and the National Health and Medical Research Council’s Centre of Research Excellence in Healthy Liveable Communities.

The report was released today, one week before a conference that will showcase the latest research on the key elements of liveable cities and consider how evidence can be used to improve policy and practice.

READ MORE about the report

REGISTER for the conference