Associate Professor Slaytor is the Prevention Centre’s Associate Director, responsible for all the governance and operational aspects of the Centre’s work.

Associate Professor Slaytor worked for more than 10 years in public health as an epidemiologist and biostatistician. Following her research in obstetric morbidity and mortality, she undertook a law degree to pursue her interest in medical negligence. She then worked for five years as a lawyer representing practitioners and hospitals in medical defence litigation.

She returned to public health to join the Prevention Centre shortly after its establishment. 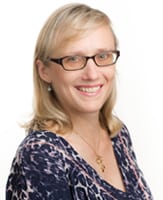 When Emma Slaytor left school, she wasn’t interested in going to university – even though both her parents were academics. Instead, she worked as a jillaroo, aerobics instructor, barmaid and vet’s assistant.

Fast forward 25 years, and she’s more than made up for it. With four degrees spanning music, medical science, public health and law, her career has included stints as an opera singer, epidemiologist and corporate lawyer.

Now Associate Director, Ms Slaytor joined the Prevention Centre as program manager in 2014 soon after its inception. “I was brought in to sort out the back end; the cogs, the nuts and bolts that people don’t tend to see that keep the Centre running. I do all the agreements, budgets, all of the reporting and have a lot of the connection with the researchers.”

More recently, strategic planning has been her focus. “The real challenge is to take the researchers’ blue sky ideas and bring them down to earth, tease out the practicalities, put them in bite size chunks and give them structure to make their ideas happen.”

Her current role combines many of her skills honed up until now – except maybe her first degree in Music Performance.

When she was working in a pub on Magnetic Island, she auditioned and got in to the Adelaide Conservatorium. After graduating, she joined Opera Australia, sharing a stage at one point with Dame Joan Sutherland.

“Working as an opera singer sounds incredibly lovely, but it’s actually a really hard job,” she says. “I was very grateful for the opportunity, but I wanted a change.”

So Ms Slaytor enrolled in a Bachelor of Medical Science, followed by a Master’s in Public Health. “It just felt ethically right,” she says. “It was interesting. I just felt like I was home; this is where I found my niche.”

She worked in public health in Sydney in various guises, in maternal and child health, in prescribing and drug utilisation and as a staff epidemiologist at the Royal Hospital for Women where she became interested in law.

“I went back to uni when my little one was one and my other daughter was four. I was working three days a week, and I studied law the other two days. I look back and think: how did I do it? But I did.”

She then got a job with a commercial law firm doing medical defence work for five years but jumped at the role at the Prevention Centre.

“I have also come back to music,” she adds. In her free time, you’ll find Ms Slaytor singing and playing keyboard with a jazz band in a pub in Balmain.