This project is finished. Click on the image to read the Findings Brief. 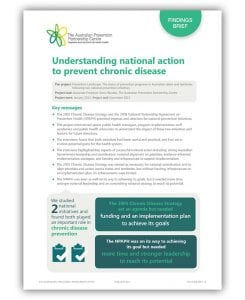 Chronic disease is Australia’s greatest health challenge. Almost one in two Australians has at least one chronic disease, significantly reducing their quality of life. Chronic diseases have significant costs, through health system expenditure and reduced workforce participation and productivity.

As much of this burden of chronic disease is preventable, policy makers and planners across Australia have produced a range of national, state and local frameworks, strategies and action plans to improve chronic disease prevention efforts. Two national approaches of particular note are:

Both the 2005 National Chronic Disease Strategy and NPAPH provided impetus and direction for national prevention initiatives. A better understanding of what they did and didn’t achieve could help inform future activities aimed at preventing chronic disease.

The views of policy makers and thought leaders on the Australian Government’s two national policy approaches to the control of chronic disease showed that both approaches were useful, practical and set in motion potential gains for the health system. This research can inform current and future large-scale, population-level health initiatives through better understanding of how previous national chronic disease initiatives were viewed and used at national, state and local levels.

As part of this project, we investigated the status of programs previously funded under the National Partnership Agreement in Preventive Health (NPAPH). In July 2015 we conducted interviews with representatives from departments of health in each jurisdiction to explore what programs had been established under the NPAPH and their status following the cessation of funding in July 2014. On the basis of this information we have put together a snapshot of NPAPH programs status as was current in July 2015.

Please note that this table below is intended to provide an accessible overview of programs established under the NPAPH and does not represent an exhaustive list of preventive health programs provided by each jurisdiction. The table will be updated periodically to ensure the information is up to date.

Programs that are completed or discontinued

This project helped to clarify the state of preventive health programs and activities in Australia and made this information publically available to both policy makers and public health researchers. Additionally, it highlighted the common successes and challenges of the NPAPH and provided a better understanding of how State and Territory governments used the National Chronic Disease Strategy.

Ultimately, it is anticipated that the findings from this research will inform the next national chronic disease strategy for Australia as well as investments in population preventive health initiatives more broadly.

This project was funded by the NHMRC, Australian Government Department of Health, NSW Ministry of Health, ACT Health and the HCF Research Foundation.

This project has now been completed. Its main findings include:

This report highlights key findings of interviews with senior public health managers from State and Territory health departments as well as senior academics, thought leaders and public health advocates from key agencies across the country. The interviews explore views about the 2005 National Chronic Disease Strategy, and responses to the cancellation of the National Partnership Agreement for Preventive Health, focusing on adjustments made to prevention programs in each State or Territory and the factors that influenced decision-making.