Jacqui Davison is a Research Officer with the Prevention Centre based at the Sax Institute. Her role is to coordinate participatory modelling projects that, in partnership with state health departments, synthesise evidence and inform policy for complex public health problems.

She most recently worked in the Australian social policy sector, and before that in international development operations, managing public health programs on behalf of donors in Papua New Guinea and across the Pacific.

Jacqui has a Master of International Public Health and a Bachelor of Arts in psychology and politics.

To read more about Jacqui, go to the “Profile” tab above. 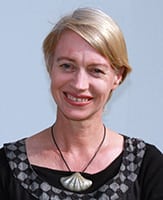 Jacqui Davison didn’t realise it at the time but growing up in Alice Springs in the 1970s and 80s instilled in her a deep sense of social justice, living as she did on unceded Arrernte land. She grew up with a strong awareness of and respect for First Nations Peoples.

“As a much smaller town, and without the ready access to transport that we have now, people tended to stay near home, so we were a close-knit community and awareness of the social divide was acute,” said Jacqui.

“This was exacerbated by the isolation of the town at the time, before there was access to cheap flights in and out.”

Initially, her love of music had Jacqui on a trajectory to teach in the field, accomplished as she was on piano and viola. She started a music degree at the Flinders Street School of Music before moving on to Charles Darwin University to study for a Bachelor of Arts degree in psychology and politics.

“Studying psychology focused my interest in people and human behaviour and getting involved in student politics and activism helped give a structure to my burgeoning ideas of social justice and how I might make a difference.”

“Studying psychology focused my interest in people and human behaviour and getting involved in student politics and activism helped give a structure to my burgeoning ideas of social justice and how I might make a difference.”

“So, I moved to the ‘coal face’ of policy development, the Department of Health in Canberra. This is where you see the real potential for cut-through and change, population levels of improvement in health, and equity.

Being on the ground and seeing the changes in community health and non-government organisations as a direct result of policy change was key for me. It was important to feel that I was helping to make improvements in Australian society, to its health and wellbeing. This has been a ‘theme’ in all my subsequent roles.”

This was followed by six years working with the Australian Government in aid agencies and non-government organisations in Papua New Guinea (PNG), the Torres Strait Islands, Timor Leste and in the Pacific. The work was initially very rewarding.

“Eventually, however, it became frustrating. Projects are funded for a finite period which means, for example, that we might build a health clinic, but once that was completed, that was it, the funding ceased and what had been put into place – buildings, healthcare workers, programs – were rarely supported. I became more interested in the sustainability of projects.

“I also began to see the interconnectedness of the services, which I didn’t realise at the time was an incipient knowledge and appreciation of systems thinking; how small things can make a big difference but how imperative it is to connect all components of a system, often crossing different sectors.

“For example, there’s not much point in introducing a vaccination program if people can’t get to a clinic. Systems thinking looks at all the components that will affect success, including whole-of-population and working multisectorally, to have the greatest cut-through.

“A vaccination program in a remote or rural area will have higher rates of participation – and success – if transport is provided. It’s a simple tweak, but with so much impact,” she explains.

The idea that a health target can be achieved – the eradication of polio in PNG for example – but not sustained, is one that is the most compelling to Jacqui and informs the work she now does at the Prevention Centre.

“How do we achieve systemic sustainability of a health intervention? I’m staggered to see that PNG was declared polio-free by the World Health Organization in 2001.  Now it is back in the country and presenting a public health problem.”

Since joining the Prevention Centre in 2017 as Research Officer, Jacqui has worked on a range of projects including simulation modelling to reduce alcohol-related harm in Tasmania, and the ongoing project building a compelling case for prevention.

“My role is to coordinate participatory modelling projects that, in partnership with state health departments, synthesise evidence and inform policy for complex public health problems.

“I started in decision analytics area using community-based projects to help understand the questions we needed to ask and to then build the models to support this community engagement for chronic disease,” she said.

“These communities are used to working with organisations that tell them what they need and how they are not achieving it. Working on this project is different; it is community-led. I see huge changes in engagement and success, they find the solution for themselves. For example, telling us that they need a bus service in order to get to the shops can change the way you buy your food. I find it hugely rewarding.”

Jacqui’s love of music has not subsided; she occasionally accompanies her son’s school choir on piano and sings with AccaPonyChoir an acapella group in Marrickville. She returns regularly to the Arrernte lands of her childhood.