A multi-disciplinary group of clinicians, policy makers, researchers and modellers have worked together to map the risk factors and causes of gestational diabetes in the ACT.

This was the first of a series of workshops for a PhD project led by Louise Freebairn involving ACT Health, Prevention Centre and the University of Saskatchewan. 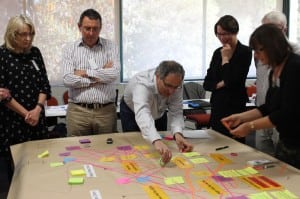 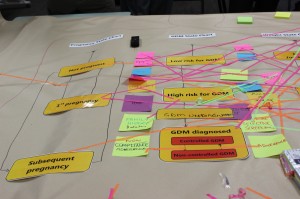 Ms Freebairn, Manager of the Knowledge Translation and Health Outcomes Team at ACT Health, said the project aimed to tackle the growing problem of gestational diabetes against the backdrop of increasing interest in systems science methods to examine complex problems.

Simulation modelling is one method under the umbrella of systems science, and can be used as a unique ‘what if’ tool to test the likely impact of a range of possible solutions before implementing them in the real world.

Ms Freebairn said a key outcome of the day was that workshop participants agreed on the importance of a population health approach to address the increasing rates of gestational diabetes.

“One participant used the analogy of current diabetes services rescuing people who have fallen into a river. They don’t have the capacity to run upstream and see why people are falling in because they are too busy pulling people out,” she said. “What they need is somebody to go upstream and stop people falling into the river in the first place. This is where population health approaches can play an important role.”

Ms Freebairn said the project epitomised the collaborative nature of the Prevention Centre, not only because of the multidisciplinary group of participants, but also its policy relevance.

“If the model can inform even small effects in the delay of the onset of diabetes, this will have huge impact in terms of the long-term benefits for health service costs and the burden of disease in individuals and the population,” she said.

The next workshop, to be held in August, will explore the likely effect of a range of interventions.