In a timely reminder of the impact of good public health policy, the UK has become the second country to introduce plain packaging, based on the success of the Australian experience.

In further good news, the Australian Institute of Health and Welfare’s National Drug Strategy Household Survey shows a continued decline in Australians’ use of drugs, tobacco and alcohol, and a rise in the age of first use. 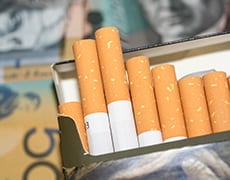 The Age reports that middle-aged women are now drinking more riskily than their daughters, and this article in The Conversation gives a good breakdown of how our use is trending.

And a reminder of why this all matters. A study that Curtin University’s Mike Daube describes in The Age as “one of the most important papers on tobacco in recent years” has just been published in the Journal of the National Cancer Institute, finding that cigarette filters have increased the risk of lung cancer from smoking.

Introduced in the 1960s to dilute smoke with air and theoretically reduce the amount of tar inhaled, cigarette filters actually increase the harms of smoking because they cause the cigarette to burn more slowly, thus allowing more time for toxic components to be released. As a result, the incidence of lung adenocarcinoma in smokers has risen in the past 50 years relative to other lung cancer subtypes. The study is already leading to calls for governments to further regulate the design of cigarettes.

Putting obesity on the political agenda

Dr Phillip Baker and his colleagues at Deakin University have conducted interesting research into how governments have historically prioritised obesity, leading to what they say is a low appetite for stronger regulatory controls on the marketing, labelling, content and pricing of energy-dense foods and beverages.

The researchers tracked the rise and fall of obesity prevention on the Federal Government’s agenda between 1990 and 2011 by analysing the way politicians used the word “obesity” in parliamentary speeches, through media and policy documents, and through a series of interviews.

They found that obesity only started figuring on the political agenda in the early 2000s. Despite two periods of attention, in NSW in 2002 and again Federally in 2004, “political priority for regulatory intervention [has] failed to emerge”, they say.

The researchers call for coordinated action to overcome the barriers to regulation, including achieving cohesion among public health experts and advocacy groups, and acknowledging the power of the transnational food industry to impede progress on Australia’s obesity prevention.

Health in all policies

Last week Wales passed its Public Health (Wales) Bill, which among other measures legislates for Health Impact Assessments (HIAs) to be included in all government regulations, policy, programs and projects.

The HIAs apply to the Welsh government, local authorities and local health boards, and require them to seek to maximise the positive health effects of a proposed action and put forward proposals to mitigate the negative effects.

This article in The Conversation explains why introducing a statutory accountability for public health could be a great leap forward in addressing the health of the nation.

Fewer studies into the social context of behavioural interventions

A fascinating study by the London School of Economics looks at the influence of social sciences such as sociology and anthropology in research into behaviour and health.

An analysis over the past decade reveals that the proportion of studies looking at the social context of health behavioural interventions has fallen, the authors say. This has led to interventions continuing to focus on individualistic explanations of behaviour.

“… a more thoroughly interdisciplinary approach is required; one that adopts a more nuanced conception of how the social and cultural context shapes behaviour,” authors Daniel Holman, Rebecca Lynch and Aaron Reeves conclude.

A powerful argument for prevention

“The dramatic plunge in smoking rates since the 1960s has saved 800,000 lives in the United States alone and accounts for most of the recent drop in cancer mortality, a 2012 American study concluded. If any basic science or drug discovery had made even close to that  impact, the scientists behind it would have been lining up to accept their Nobel prize, said [internationally renowned University of Montreal cancer epidemiologist Jack] Siemiatycki. “Curing cancer gets votes,” said Siematycki. “There are no grateful people saying, ‘Thank you for preventing my bladder cancer.’” …

Yet, as Sandra Huggett struggled with her own, likely avoidable disease, her husband Alan saw less-than-hopeful evidence of health care’s priorities. The cancer centre in Prince George [British Columbia, Canada] provided top-notch care, he said, but its “prevention office” was a little, windowless room, staffed part-time by a single worker.

“To me, it’s ass-backwards,” he said. “You have all these millions of dollars of cancer treatment stuff, and then you have a dinky little cupboard, basically, for prevention.”